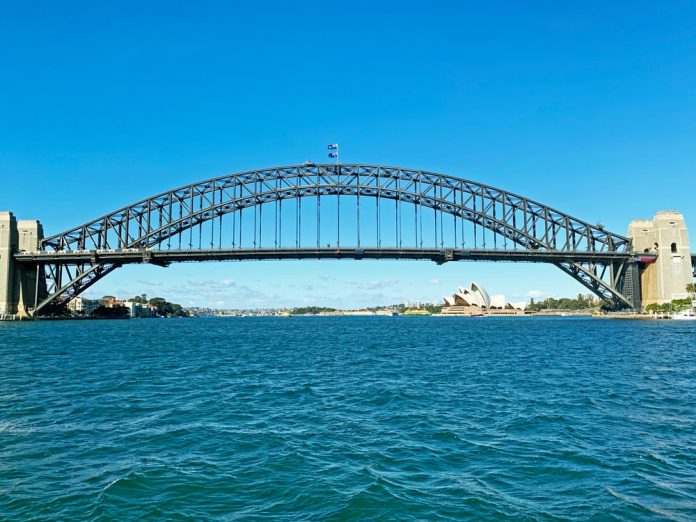 Famous architect Sir Ove Arup once said that there are many solutions to engineering problems, good, bad and indifferent. According to Ove, the art of engineering “is to arrive at a good solution… a creative activity, involving imagination, intuition and deliberate choice.” Ove Arup, the industry’s eminent concrete designer, trusted Danish architect Jørn Utzon to design the Sydney Opera House. Incorporating both concrete and steel in their structure, it stands as one of the most recognisable buildings in Sydney. But it’s not the only impressive steel structure in Sydney. Across the beautiful harbour city are various steel structures, each either their own remarkable story and design. With input from Sydney’s premier steel fabricator, Steel Builders, let’s run down the list of some of Sydney’s most superb steel buildings still standing today

Designed by British firm Dorman Long and Co Ltd under the NSW Department of Public Works, the 503m long Bridge reaches 134 metres, making it the tallest steel arch bridge in the world. Taking clear inspiration from the Hell Gate Bridge in New York, the Bridge was constructed using nearly 53,000 tonnes of steel, with 39,000 tonnes being held in its arch. The Bridge is held together with a complex steel design of six million Australian-made hand-driven rivets. Steel was primarily sourced from Dorman Long’s mills in Redcar, England, with the rest coming from the BHP mill in Newcastle, NSW. Steel was fabricated into girders onsite in two large workshops built at Milson’s Point, now the home of Sydney’s Luna Park.

Made possible by the efforts of engineer Dr JJC Bradfield, when the Bridge was completed, engineers tested the deck’s strength by lining up ninety-six locomotives laid end to end along the railway tracks on the eastern side of the Bridge. Stabilising the arches were 28 steel cables anchored in tunnels excavated into the bedrock on each embankment.

Adding to its history, on 19 March 1932, the day of its opening, Francis De Groot, a member of the ultra-right-wing New Guard group, rode a borrowed horse out from the crowd, slashing the ribbon with a cavalry sword before then NSW Premier Jack Lang could cut the ribbon.  After Lang cut a new ribbon, Groot was arrested and fined £5 (roughly £500 today).

An icon in many ways, the Sydney Opera House is a marvel to Sydneysiders, tourists, and architects alike. Though it was considered an expensive project for its time, then NSW Premier Joseph Cahill urged parliament to be courageous and “pledge the future if need be” in March 1957. Marked by rain, crowds gathered on 2 March 1959 to see construction begin on the Sydney Opera House with 700 steel-cased concrete shafts, nearly 1 metre each in diameter, into the perimeter and northern half of the site.

Incorporating radical design elements like its famous geometric roof tiles, engineers used pre-stressed steel tendons to support the curvature of the building’s outer walls. Spanning across the main hall, Utzon and Ove Arup and Partners produced arched segments of varying curvature by cutting a three-sided piece out of a sphere. Each concrete shell and its vaulted concrete ribs were pre-cast and held together by pre-stressing steel tendons, a remarkable innovation for its time. Other sections of the roof are held together by 350 km of tensioned steel cable. The adjoining arch segments were constructed on a steel centring and stressed together to form a stable structure.

In 2013 the Opera House celebrated the 40th Anniversary of its opening. Over its near fifty-year existence, the cultural centre of Sydney has undergone a variety of changes since Jørn Utzon first envisioned it. “As the architect of the Sydney Opera House, as the creative force behind its character, I sincerely believe that a large multipurpose structure such as this building, in time, will undergo many natural changes,” Utzon wrote.

According to Deloitte, the Sydney Opera House is reportedly worth $4.6 billion, a vindication of daring designers and architects from previous generations. The 40th-anniversary celebration also marked the beginning of the Opera House’s Decade of Renewal, the most extensive program of capital works since it opened in 1973. Taking over 400,000 structural engineering manual hours and 2,000 computational hours to complete, the Sydney Opera House is most definitely one of the city’s most incredible steel buildings.

Dubbed Sydney’s Eiffel Tower, the AWA Building held the honour of being Sydney’s tallest between 1939 and 1967, thanks to the 48-metre tall lattice steel broadcasting tower above the original home of Amalgamated Wireless Australia. Located at 45-47 York Street, the AWA Building is steel framed and faced in brick and was completed just before World War II, reaching the height limit of 46 metres tall. Vertically modelled after New York skyscrapers, the building is adorned with a Pegasus, a winged horse, chosen by Sir Ernest Fisk (wireless pioneer and founding director of AWA) to symbolise Australia’s significant wireless undertaking.

The addition of the tower brought the heritage-listed building’s overall height to 111 metres above street level, with a viewing platform at the 97-metre point. Modelled after the 1925 Berlin Funkturm Tower and, as well as the Eiffel Tower in Paris, it remained the tallest structure in Sydney (other than the Sydney Harbour Bridge) until the 1960s.

During its heyday, the building bore large AWA neon logos to symbolise the firms’ entry into television manufacturing. Before the company’s closure and sale to Jupiter’s Casino Group in 2000, the tower was demolished and rebuilt in 1994 at the cost of $600,000 by its owner, developer Alan Cardy. Though it remains illuminated at night, the viewing platform is no more.

An Expressions of Interest campaign on behalf of four separate owners is currently underway with a “potential for an incoming owner to consider multiple options to create value and capitalise on the building’s strategic location”, according to CBRE’s Harry George.

Considered “one of the most successful commercial developments in Sydney for a long time,” Deutsche Bank Place is more than just a thirty-one-storey steel building close to Sydney Harbor. It’s a response to the context and the spirit of the city that redefines the nature of the standard office tower. Exploring new strategies for flexible, column-free office space, 126 Phillip Street, Sydney, creates a new ‘urban room’ in the city’s dense central business district.

Completed by Foster and Partners, the main structure consists of two towers and a  vast, highly flexible, column-free floor plate. At the time of its construction in 2006-2008, the design was considered thirty per cent more spatially efficient than traditional commercial buildings. Or as Foster and Partners project architect Sven Ollmann summarised in their brief to the architects: “to create the most efficient floor plate Australia has ever seen”.

Its unusual design of the building featured repeating horizontal triangular silver aluminium cladding along with the columns every three floors. Its unique V-shaped steel chevron extends three stories above the occupied floors, bridging the gap between the two neighbouring buildings, completing Sydney’s eastern skyline with what can be best described as mega-grid construction.

Now that you’ve learned about Sydney’s incredible steel structures, it’s time to learn about the city’s premier supplier of fabricated steel, Steel Builders. While they won’t be seen working on the Harbour Bridge, or the Opera House, you will see them in the neighbourhood, supplying steel for building, extending and renovating Australian homes. If you want the best NSW Structural Steel Specialist in Domestica/Residential Home Market, then strike up a conversation with us today.

Steel Builders offers a complete package to create smart solutions across the industry, from CAD drafted shop drawings to painting and galvanising, making it easier for on-site installation. Get in touch with them today to make your next project a success.

How Can You Minimize Your Time to Hire

Comparing The Echo vs Echo Plus

Where Racehorses Go When They Retire

Which African Country Will Perform Best At The World Cup?